Amphibia Wiki
Register
Don't have an account?
Sign In
Advertisement
in: Featured Articles, Episodes, A to Z,
and 5 more
English

Sunmin Image Pictures
"Combat Camp" is the second segment of the eighteenth episode of the first season of Amphibia, and the thirty sixth episode overall.

Anne, Sprig and Polly are forced to stay at a daycare center that turns out to be more than it seems.

While Hop Pop heads to Crop-Con, Anne, Sprig and Polly are forced to stay at a daycare center with Tritonio Espada, the new owner. But when Hop Pop leaves, Tritonio turns out to be an adventurer-type instructor who turned the daycare into a combat camp loaded with various weapons of different kinds such as swords and spears. While Tritonio praises Sprig and Polly, he pushes Anne to train harder.

Anne feels that Tritonio's picking on her, similar to her experience with her teachers back home and asks him why; he explains to her that he's tough on her because he believes in her potential. He gives Anne his family sword and trains her to fight. On the last day of their stay, Tritonio has them learn an expertise plan that involves stealing a precious gem from a moving train. Sprig and Polly question it as they figure out it's an actual crime rather than what Tritonio called an "act" set up by him, but Anne trusts Tritonio and says they should do it.

On the train, they manage to get pass the guards and get the Tiger-Moth's Eye, a priceless ruby. Tritonio takes it and is revealed to be a train-robber who only used the kids to get it, as he had done to previous children before them. They escape the train carriage by using Polly's blue boomshroom explosives and Anne fights Tritonio. She defeats him and the guards of the train take him away once it stops. Back at the camp, a super injured Anne, Sprig and Polly are exhausted from their wild adventure. While Anne feels betrayed by Tritonio, she'll still give teachers a chance as she states she'll do back at home now. Hop Pop then returns to pick up his kids, also super injured. However, knowing that each other's day was terrible, the Plantar kids lie about not robbing the train while Hop Pop lies about not being attacked by locusts (which he did at the Crop-Con), and says that they're glad that they "didn't" get into two wild adventures (which they did).

Title in other languages 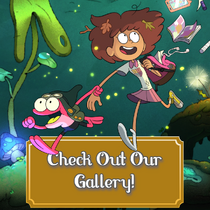